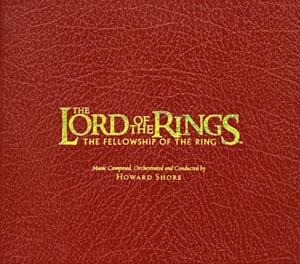 1. The Prophecy
2. Concerning Hobbits
3. The Shadow of the Past
4. The Treason of Isengard
5. The Black Rider
6. At the Sign of the Prancing Pony
7. A Knife in the Dark
8. Flight to the Ford
9. Many Meetings
10. The Council of Elrond featuring “Aníron (Theme for Aragorn and Arwen)” Composed and performed by Enya
11. The Ring Goes South
12. A Journey in the Dark
13. The Bridge of Khazad Dum
14. Lothlorien Featuring “Lament For Gandalf” performed by Elizabeth Fraser
15. The Great River
16. Amon Hen
17. The Breaking of the Fellowship Featuring “In Dreams” performed by Edward Ross
18. May It Be Composed and performed by Enya