The Lord of the Rings Symphony 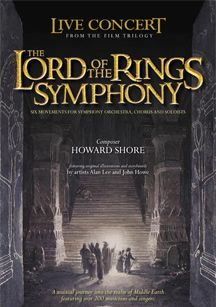 Composer Howard Shore’s epic score for The Lord of the Rings film trilogy is a monumental effort that expresses J.R.R. Tolkien’s books and Peter Jackson’s films as an immense symphonic work. The result is a uniquely all-encompassing vision created from centuries of stylistic tendencies, each treated with the utmost respect.

The heart of the film, the music, not only captures its sweeping emotion, thrilling vistas and grand journeys, but also echoes the very construction of Tolkien’s Middle-earth. Styles, instruments and performers were collected from around the world to provide each of Tolkien’s cultures with a unique musical imprint. The rural and simple hobbits were rooted in a dulcet weave of Celtic tones. The mystical Elves touched upon ethereal Eastern colors. The Dwarves, Tolkien’s abrasive stonecutters, received columns of parallel harmonies and a rough, guttural male chorus. The industrialized hordes of Orcs earned Shore’s most violent and percussive sounds, including Japanese taiko drums, metal bell plates and chains beaten upon piano wires, while the world of Men, those flawed yet noble heirs of Middle-earth, was presented with stern and searching brass figures. In operatic fashion, these musical worlds and their themes commingled, sometimes combining forces for a culminated power, other times violently clashing…and always bending to the will of the One Ring and its own ominous family of themes.

After four years of writing, The Lord of the Rings Symphony: Six Movements for Orchestra and Chorus was realized. Together with conductor John Mauceri, Shore adapted the form and transitions from the longer film scores, molding them into a series of tone poems free of the specific visual linkage with the films and adhering more to the traditions of the programmatic orchestral works of Strauss, Liszt, Smetana and Sibelius.

The work’s vast scope calls for symphony orchestra, mixed chorus, boys chorus and instrumental and vocal soloists singing in the Tolkien-spawned languages Quenya, Sindarin, Khuzdûl, Adûnaic, Black Speech, and Old and modern English. Styles, instruments and performers were collected from around the world to provide each of Tolkien’s cultures with a unique musical imprint. Original folk songs stand alongside diatonic hymns, chromatically complex tone clusters and seething, dissonant aleatoric passages. It is purposeful, knowing writing, as contained in execution as it is far reaching in influence, for within this broad framework resides a remarkably concise musical vision. Shore’s writing assumes an earthy, grounded tone built on sturdy orchestral structures and a sense of line that is at once fluid yet stripped of frivolous ornamentation.

The Lord of the Rings Symphony: Six Movements for Orchestra and Chorus keeps one foot in the literal world of opera while depositing the other in a self-governing consideration of J.R.R. Tolkien’s philosophical contemplations. The lightest moments of the hobbits’ rustic whimsy remain touched with a maturity that acknowledges change inevitably lurks on the horizon. And in the grandest moments of spectacle, where Shore opens up the full forces of over two hundred musicians, the music is forever rooted in the hopes, ideals and frailties of this very human drama.

Each of the symphony’s movements corresponds to one book within the Tolkien’s tome. Adding to the drama of the performance, and at Shore’s request, video artist Davey Frankel has incorporated the breathtaking imagery of renowned Tolkien artists, Alan Lee and John Howe.

Shore stated: “It is very gratifying to see the music from The Lord of the Rings trilogy find a new life on the concert stage. The music was conceived in Wellington through collaboration with Peter Jackson, Fran Walsh and Philippa Boyens and it is only fitting that the piece had its premiere in Wellington, New Zealand, which is the home of Middle-earth. Since the premiere, the symphony has played in sold out performances in North America, Europe, Far East, and Australia.