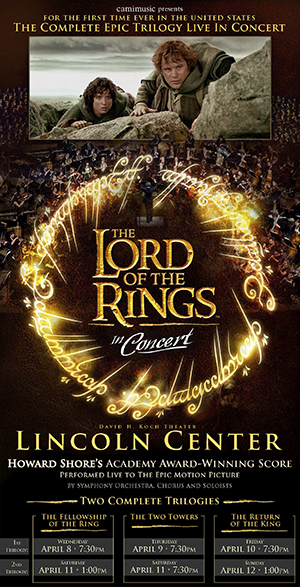 250 MUSICIANS ONSTAGE BENEATH A GIANT SCREEN

TICKETS, PACKAGES AND PURCHASE INFORMATION
Individual tickets begin at $59.
Trilogy packages are $240 for a Hobbit Package and $400 for the VIP Gondor Package, including:

* Locations and additional information to be announced

Packages are available online at davidhkochtheater.com/subscription/packages.

The David H. Koch Theater is located at the south side of the Lincoln Center Plaza at Columbus Avenue and 63rd Street.

Week to Include Forums and Additional Events

NEW YORK, NY — For the first time in North America, the complete film trilogy The Lord of the Rings will be presented live, in concert, at the David H. Koch Theater at Lincoln Center, New York, April 8-12, 2015. Beneath a giant screen, the Academy Award-winning scores by Howard Shore will be performed by 250 musicians, on stage, including symphony orchestra, chorus and soloists, in two trilogies, Wednesday-Friday, April 8-10, and Saturday-Sunday, April 11-12. The production is created by CAMI Music, and follows acclaimed concert presentations of the first two films of The Lord of the Rings trilogy at Radio City Music Hall (2009 and 2010).

The Lord of the Rings, In Concert, at Lincoln Center, features the 21st Century Symphony Orchestra & Chorus of Lucerne, Switzerland, conducted by Ludwig Wicki, which specializes in bringing films and their scores to life, and performs an annual program of film concerts at the KKL Luzern. Soloists and chorus for the 2015 trilogy performances at Lincoln Center, as well as related forums and other events, will be announced at a later date.

Howard Shore commented on the meaning of this North American premiere presentation of the trilogy, in concert: “It was fascinating to watch the performances of individual films of The Lord of the Rings, In Concert, at Radio City in 2009 and 2010. For those events, people came from all over the world: Scandinavia, Europe, the Far East. The book has been translated into 40 languages and has attracted a global fan-base. But the fan community doesn’t often have the opportunity to come together in person and coalesce around a performance like this at the highest level. The trilogy at Lincoln Center is unique and something powerful happens – a synergy is created – in bringing together the music, live on a massive scale, with the films, in a magnificent house, and not only for one night, but presented over the course of a week. To bring the trilogy to New York is meaningful as it’s a center of the cultural world, and Lincoln Center is at the heart of New York. It’s the perfect place to play the Trilogy in its entirety. We hope that everyone who travels from near or far will feel they’ve arrived at a kind of contemporary, cultural Middle-earth.”

HOWARD SHORE, COMPOSER
Howard Shore is among today’s most respected, honored, and active composers and music conductors. His work with Peter Jackson on The Lord of the Rings trilogy stands as his most towering achievement to date, earning him three Academy Awards. He has also been honored with four Grammy and three Golden Globe awards. Shore was one of the original creators of Saturday Night Live. He served as the music director on the show from 1975 to 1980. At the same time, he began collaborating with David Cronenberg and has scored 15 of the director’s films, including the forthcoming Maps to the Stars, The Fly, Crash, and Naked Lunch. His original scores to A Dangerous Method, Eastern Promises and Dead Ringers were each honoured with a Genie Award and Cosmopolis was awarded for score and song “Long to Live” with Canadian Screen Awards. Shore continues to distinguish himself with a wide range of projects, from Martin Scorsese’s Hugo, The Departed, The Aviator and Gangs of New York to Ed Wood, The Silence of the Lambs, Philadelphia, and Mrs. Doubtfire.

In 2008, Howard Shore’s opera The Fly premiered at the Théâtre du Châtelet in Paris and at Los Angeles Opera and just completed a successful run at Theatre Trier in Germany. Other recent works include the piano concerto Ruin and Memory for Lang Lang which premiered in Beijing with the China Philharmonic Orchestra in 2010, the cello concerto Mythic Gardens for Sophie Shao which premiered with the American Symphony Orchestra in 2012 and Fanfare for the Wanamaker Organ in Philadelphia. He is currently working on the score for the third film of The Hobbit trilogy.

Shore received the Career Achievement for Music Composition Award from the National Board of Review of Motion Pictures, New York Chapter’s Recording Academy Honors, ASCAP’s Henry Mancini Award, the Frederick Loewe Award and the Max Steiner Award from the city of Vienna. He holds honorary doctorates from Berklee College of Music and York University, he is an Officier de l’ordre des Arts et des Lettres de la France and the recipient of the Governor General’s Performing Arts Award in Canada.

21st CENTURY SYMPHONY ORCHESTRA & CHORUS
LUDWIG WICKI, CONDUCTOR
Magnificent film music is the credo and passion of the 21st Century Symphony Orchestra & Chorus, based in Lucerne, Switzerland, and it’s artistic director, Maestro Ludwig Wicki. The orchestra presents about 45 concerts of symphonic film music annually in the world renowned Concert Hall at the KKL Luzern and on tour. Because the voice is frequently a key element of film music, the Chorus has become an integral part of the concert activities of the 21st Century Symphony
Orchestra, participating in almost all concerts in Lucerne, and also on tour. In 2007, the 21st Century Symphony Orchestra initiated a rich collaboration with composer and triple Academy Award-winner Howard Shore. The pinnacle of this work, the highly acclaimed soundtrack from The Lord of the Rings: The Fellowship of the Ring, was performed in 2008 as a world premiere by the orchestra, live in synchronization to the epic motion picture. In the following years, this project continued with world premieres of The Two Towers (2009), and The Return of the King (2010). In addition to other performances, the first two films of the trilogy were subsequently presented, in concert, at Radio City Music Hall in New York.

The 21st Century Symphony Orchestra & Chorus has presented a wide range of epic films as live world premieres, including Pirates of the Caribbean, Gladiator, and Disney’s Fantasia. Concert tours have led the orchestra to renowned concert venues such as the Auditorium Stravinsky in Montreux, the Alte Oper in Frankfurt, and the Palais de Congrès in Paris. Renowned film composers such as Academy Award-winners Howard Shore and Michael Giacchino, singer-songwriter Randy Newman, or Bafta Award-winners George Fenton and Patrick Doyle, have taken great pride in working with the 21st Century Symphony Orchestra & Chorus.

In spring 2014, the 21st Century Symphony Orchestra presented Star Trek (2009) and Star Trek: Into Darkness as live in concert premieres in Lucerne, and also in the legendary Royal Albert Hall in London.